Choosing the perfect place for your relocation is never easy. Especially if you are a student or you are moving with your children. The education is the most important things in those cases. If you want to secure your child the best possible education, you should find a place with excellent schooling system. There are the best US states for education, and there are the ones that don’t excel in that area.

Things to consider when choosing the best US states for education

Although education is the primary priority when choosing the new state to live in, there are also many other things to consider as well. If you are moving cross-country with children, you will be looking for more family-friendly places. When you are moving as a student, you will have different requirements. Such as the quality of the nightlife and entertainment.
Regardless, there are some basic things that apply for every type of relocation when choosing the best US states for education:

Affordability – there’s no point to consider living in the state that you can’t afford. So before you start the search for the best US states for education, determine your incomes and monthly budget. If the living expenses in the state are bigger than that, cross that state of your list.

When you are relocating to another state, you will need the help of the professional movers. Moving long distance is not a task that you can do it on your own. Check out the dynamicmoversnyc.com, since it is one of the best moving company on the market.

The best US states for education

Relocation to another state is a huge task. It involves many things. Finding a new home, finding the perfect moving company, making a moving checklist, calculating the price for your move, packing etc.

Before all of that, you have to be sure that you are moving to the US states with high education rating.
To help you with that, we’ve created the list of the best US states for education.

According to the latest educational ranking, Massachusetts is a state with the nation’s best schools. Massachusetts is fulfilling all of the important categories – chances of success, school finance, and achievements.

This state has great concern for the education. Massachusetts is spending $14,569 per pupil per year, which is much higher than the national average per-pupil expenditure of $12,526.

The overall student’s achievement is better than in any other state in the US.

High school graduation rate is 87.5 %, while the percentage of the adults with at least a bachelor’s degree is astonishing 42.7%.

Massachusetts has many prestigious education facilities and it’s ranked as a state with the nation’s best schools.

New Jersey has even higher per-pupil spending level than Massachusetts. The state public school system spends about $16,300 per pupil, and 4.8% of the state’s total taxable resources goes towards education.

New Jersey has a high school graduation rate of 90.1 %, and 38.6% of adults with at least a bachelor’s degree.

Higher state funding of the public education doesn’t always mean better student performances, but in this case, it is paying off since New Jersey is one of the best US states for education.

Vermont is the state that annually is spending the highest amount per-pupil of all states – $20,795.

The investment in public education has made Vermont’s schools third best in the nation and one of the best US states for education.

The equity in education funding Vermont’s school system is more equitable than most. Meaning that the gap in test scores of children in low-income families and their higher-income peers is the smallest of all states.

The percent of the adults with at least a bachelor’s degree is 36.4, while the high school graduation rate is 87.7%.

Almost two-thirds of children that live in the New Hampshire state have at least one parent with a college degree.

That is the highest proportion of all states. Since the college education is one of the most reliable paths to gainful employment and financial stability, that maybe the reason why New Hampshire has the nation’s lowest poverty rate.

State of New Hampshire is spending $15,719 per pupil per year. That is a big part why New Hampshire student’s achievements on standardized tests are some of the highest in the country.

What makes New Hampshire one of the best US states for education is also its high school graduation rate – 88.2%. 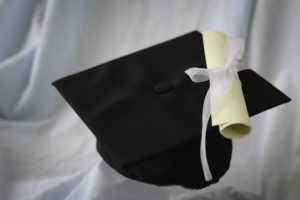 A great percentage of the college graduates can be the reason why this state has the lowest poverty rate.

Connecticut is a state that takes care of the children education from the very beginning. The preschool enrollment in the state is 80.7% – the third highest in the country.

Students from this states are having great success in later years, and the strong early childhood education programs may have a part in that.

The state of Connecticut is spending a $17,283 per pupil annually, and the high school graduation rate is at 87.4%.
Adult residents with at least a bachelor’s degree are the 38.6% of the state’s population.